The Mayor of Kingstown

"The Mayor of Kingstown"

Brothers Mitch and Mike McLusky navigate Kingstown, home to multiple prisons, as they act as the liaisons between prisoners and the community. When a young guard, Sam, is set up to deliver a letter for a prisoner, Mike works to get him off the hook.[1]

Mike narrates how it’s up to him to keep the rats in the cage content, and the keepers from becoming rats themselves. He then goes on to explain how Kingstown is a company town, where the business is incarceration. A place where seven prisons within a ten mile radius is the norm.

Two days earlier, Mitch sits behind his desk at his office hearing an angry guy named Walter complain how his kid now has all these guards hanging around his cell like a bunch of vultures. He then begins to yell how he had told Mitch to get his son transferred. Mitch smirks and says he isn’t the warden, and calmly explains that Walter’s son got into this mess for hitting a guard in the first place. Once he wraps up his appointment with Walter, he asks his secretary if there is anyone in his waiting room with any pressing matters. His secretary at first mentions that it’s no more than usual. But just as Mitch is about to leave and take a break, she remembers that out in the waiting room is Vera,the wife of Milo Sunter. Mitch sits back down and tells his brother Mike that he will catch up with him later.

Vera mentions how Milo, ever the optimist, is doing good and is counting the time he has left till he gets out. Mitch mentions how it’s a little too early to start that. Eventually Vera confesses that her husband needs something moved. She states that she will be leaving for Estonia tomorrow night, and she must take all the money (sans $10,000 for Mitch) with her.

At a prison in town, Mariam is teaching a class on the civil war, and she tells the inmates who are also students that even today the textbooks will tell you that the civil war came about as a result of a disagreement on state’s rights. But it was much more than that. Mariam explains that it was a war for a state’s right to decide its position on slavery. Thus, this was a war fought for the freedom to choose slavery. She also states that this was the only time in recorded history that the oppressors fought each other over the rights of the oppressed. Mariam then goes on to say how this was the most formative event in this nation’s history, but that the catharsis of that union victory, and the freedom of the slaves was short lived. As Mariam narrates, only a decade later a new union of mostly imprisoned confederate soldiers and immigrants reignited the genocide begun by Columbus some four hundred years earlier. She is about to continue but the bell rings and instead she tells her class to read the next two chapters and that she will see them tomorrow. A female inmate hangs back after class and tries to get Mariam to talk to Mitch, who is referred to as the Mayor because she has a cousin coming in and needs some help. But an angry Mariam warns the inmate to never bring up her sons in front of her ever again. The inmate apologizes and scurries out of the classroom.

Mitch ends up working out a deal with Bunny, a leader of one of the city’s local gangs. As Mitch and Mike leave, Bunny jokes that if it weren't for the McLusky brothers, they would all be dead.

Later that night, Kyle is getting ready to leave his house when he gets a call. He tells the person on the other line that he is on his way. But he needs to go to the station first. However his wife Traci isn’t too thrilled that he picked up a shift an hour before their dinner reservations. Eventually, the three McLusky brothers gather outside the police station and drive off to their destination. Eventually, Mike and Kyle find the $200,000 of Milo’s money buried without any trouble. To which Kyle jokes that it was quite anticlimactic. But Mike explains that is how he likes it.

Vera finishes her shift at the strip club and eventually gets to her home safe and sound. She gets undressed and throws the red dress she was wearing into the trash can. Eventually, she ends up watching some late night television while eating some cereal. Much to her surprise,the man she gave a lap dance to earlier is in her home. She tries to stay calm as the man asks her why they call Mitch the Mayor. He then reminds her that he ran out before Vera could finish her other two lap dances. Vera tells him to come to the bar the next day and she will give them to him then, but he insists that he wants them now. She agrees and sets down her bowl of cereal. But quickly takes out a gun he keeps on her night stand. Unfortunately, issues between Vera and the mystery guy come to a head.

At Mitch’s office, Mike and Kyle deposit the bag of money from Milo’s hiding spot. Kyle tries to hurry up his brother as his real shift is starting in a bit. Not long after, Mitch asks if it’s all there (in reference to the money). Mike says that he didn’t count but it should be all there. Mitch then reminds Mike how they have to do that FedEx job for Bunny.

Early the next morning, Mitch arrives at his office and ends up with a gun to his head by the same guy who surprised Vera the night before. The mystery man orders Mitch to open the safe and despite Mitch’s warnings to the guy, issues between Mitch and the mystery guy come to a head.

Eventually, Mike, Kyle and Mariam are informed about what happened to Mitch. At a bar, one of Milo’s men tries to threaten Mike for the job that went wrong. But instead, Mike tells the henchman that Milo can’t blame him or his family for what happened. But if he has a problem, then he can easily have Milo killed. Then, Mike finishes off by saying that he can very easily take everything that his brother Mitch gave to Milo and his henchmen.

Later, Mariam remarks how it’s the first time that Mike has come home before dawn. Mike then tells his mom how they don’t break the law; they bend it to make peace for everybody. Mariam reminds her son that she is very familiar with what her children do because her husband invented that. She chastises Mike and tells him how he should not delude himself into believing that all he does is for the greater good. She then reminds him that Mike works incredibly hard to accomplish absolutely nothing. But in the end, he just prolongs the inevitable.

A distraught woman comes to Mitch’s office and while he tries to leave, he ultimately can't without helping the woman in question. Thus he asks the woman what the girl’s name is. 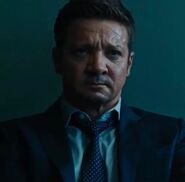 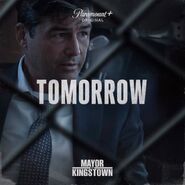 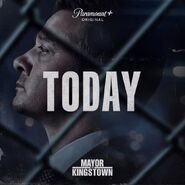 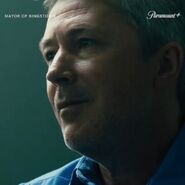 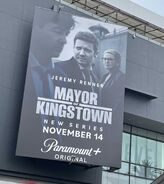 Mayor Of Kingstown - Where The Only Industry Is Incarceration - Paramount+